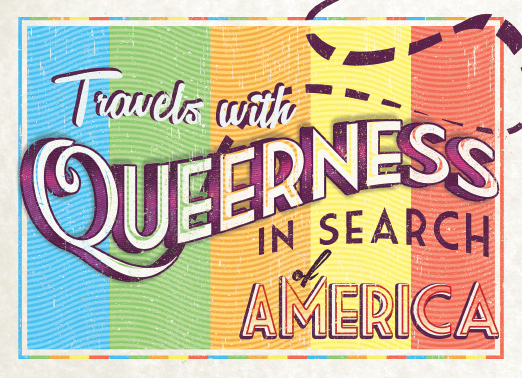 Image shows a postcard with vertical, rainbow stripes in a vintage fashion.  The text reads: Travels With Queerness: In Search of America

Kim Sharp is one of my favorite queer, feminist writer friends.  She recently took a big, brave risk in doing a micro-retirement so she could work on her writing.  One of the fruits of that labor is her new project, Travels With Queerness, which explores what it means to take up space as a gender-nonconforming, feminist person on the road with their best friend, who happens to be a pit bull.  I interviewed her today to find out more about the project and what it means for space to be political.

Tasha Walston:  Hi, Kim!  Thanks for doing this interview.  What is Travels With Queerness?

Kim Sharp: Travels With Queerness is a book project that’s based off a road trip I’m going to take with my dog, Petey, this September. Think Steinbeck’s Travels with Charley, but through a queer, feminist lens. I came up with the idea earlier this year when I was re-reading Travels with Charley. I wanted to take Petey on a similar trip, but I knew it would present challenges because of our identities: I’m a lesbian, and Petey is a pit bull.

I’ve mapped out a route that will take us more than 5,500 miles, through 11 states in the western US over the course of 25 days. During the trip, I’m going to post short essays detailing our experiences on my website, TravelswithQueerness.com, and via Facebook and Twitter. The book will draw everything together into a cohesive narrative.

I started thinking about all the things I’d have to do before traveling–mostly how I would present, and what I would do to stay safe. I thought about getting mace, maybe growing my hair a little or dressing a little more femme. I even thought about things as simple as taking the HRC equality sticker off my car.

And that’s when the idea of a trip transformed into a project. Changing my appearance and removing that bumper sticker would mean altering my identity. Losing that authenticity would kill so much of the project’s meaning. 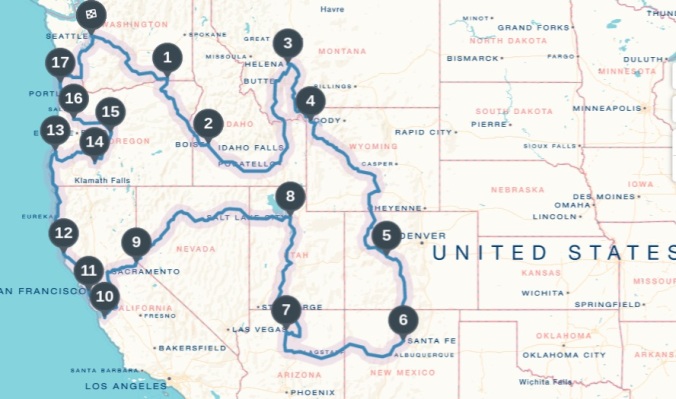 Image shows a map of the Northwestern United states with a travel route drawn on in blue.  Individual stops on the route are marked numerically.

TW: So it was Steinbeck’s book that made you want to go on the journey?

KS: That and a few other things. I’m doing a sort of mid-life, micro-retirement this year, and I want to make the most of it. I want to spend more time with Petey and take him on some big adventures. He’s 11–but let’s not go there.

The other really big influence: a book my grandma gave me when I was eight. It’s this beautiful coffee table book called Natural Wonders of the World. She got it free with a subscription to Reader’s Digest. I fixated on Craters of the Moon in Idaho and Crater Lake in Oregon. I’ve never seen either.

So it all started coming together: a road trip with my dog, in search of natural wonders and the open road.

Steinbeck’s book made want to go on this trip and it made me want to politicize it.

Image shows a white pit bull on the left with a brown spot over one eye and tongue lolling. On the right is a smiling person with short, brown hair wearing sunglasses, a hoodie, and a seatbelt.

TW: Why does it matter that you’re traveling as a queer, feminist woman?  Are you doing the trip because of or in spite of your identity?

Both. Absolutely both. My plans started coming together right after the Oregon stand-offs came to an end. I couldn’t help but think of the culture in some of the places I wanted to go. Eastern Washington, Eastern Oregon, and Idaho aren’t the most welcoming areas in the Northwest.

So it’s scary, right? As it would be for many women. We’re told not to travel alone and to avoid the places where we don’t feel safe–and for good reason.

If I followed that advice, though, I wouldn’t see all the places I want to see. I probably wouldn’t even leave my house. I can’t separate my fuck-it attitude from my queer, feminist identity. I shouldn’t have to. None of us should.

But here’s another thing: I’m not strongly connected to either of these communities. I’m too shy and introverted to do any sort of activism. Crowds aren’t my thing, so I don’t go to Pride or LGBT events. I’m more or less on the periphery of the LGBT community–yet I call it mine. I grapple with that a lot.

So I come back to what I am capable of and how I can contribute. I’m a writer. I believe in the power of story and I want to capture the stories that aren’t being told. Putting myself out there with this project, sharing my experiences as I seek answers to big questions, then drawing it all together in a book–that’s my contribution.

I question–constantly–who I am on this journey. Who or what am I traveling with? And it all comes back to that one day when I was at my most vulnerable, when I was threatened because I am comfortable in my skin.

TW: It would be scary for any woman to travel alone.  How do you think your queerness complicates that?

KS: One of my first girlfriends told me that lesbians in Seattle are more or less invisible. For a long time I believed that. I felt safe. That changed after I chopped off my long hair and started dressing more masculine. I’ve been harassed, and I’ve been discriminated against because of the way I present. I’m a short, fat woman with a butch-like aesthetic, and I think it’s pretty obvious I’m gay. I think about that all the time. I also think about how my experiences are nothing compared to what others in my community have experienced.

Yet, there’s something about being called “faggot” that goes far beyond the gut punch. It made me feel more connected to the LGBT community in this really weird way. It was a reminder that we’re not invisible at all. Any of us could, at some point, be a target. We are all vulnerable.

TW: Someone called you “f*ggot?”  Can you tell me about that?

KS: Sure. It started as road rage on the commute home. I honked at a guy and he started tailing me. He followed me for a couple miles and I knew it was a bad situation. He wasn’t going to back off. So I went to the safest place I could think of–somewhere where men would be outside. The guy followed me there, got out of his car, and came at me with fists raised. He was ready to lay into me.

Then he saw my tits.  It shocked him. He said he thought I was a dude. Then his fists dropped. He started shouting “faggot, fucking faggot.” Over and over and over. He was inches from me. I was rendered mute. I couldn’t talk, couldn’t move.

All it took was for him to shout that word at me once and I felt worthless and dirty. But he kept throwing it at me and the more he did, the more I believed it.

TW: That must have been terrifying.

KS: Terrifying isn’t the right word. It’s been over a year and I can’t find the right word. Of course I was terrified, but while I was being threatened I was also being told that I’m worthless, because of who I am. Because I’m gay.

TW: If you’ve experienced that kind of harassment in a “liberal” city in the Northwest, do you have any particular fears or hopes about what will happen on the road?

KS: Definitely. Here’s the thing: the harassment took place in Shoreline, literally across the street from where the Seattle PD jurisdiction stops. If I’d gone one more block, this would have been reported as a hate crime. I talked with Jim Ritter, SPD’s LGBT liaison. He couldn’t take a report, but after hearing all the details he assured me it was a hate crime. I filed a report with the Shoreline PD, and guess what–they said it’s not a crime at all. So hey, if you want to engage in a car chase, physically threaten someone, verbally assault them, go to Shoreline.

It’s not just about what happens in different areas of the country, it’s about how these things are handled.

I got a lot of great support from Jim, and plan to talk with him about the trip and safety precautions and so forth. That alone fills me fear and anger–that I even have to do this, that I have to seek this kind of support.

So, yes, I have fears. That incident taught me something I didn’t think of much before: I’m a target. That changes everything.

TW: What are some places you are particularly looking forward to visiting?

Mostly, I’m looking forward to seeing the places I don’t know about. I’m fascinated by small towns. I want to talk to people there–if they’ll let me. I want to know what it’s like in other places. How does geography affect how we move through our worlds?

Image shows a white pit bull with a brown spot on one eye and sporting a red vest. The dog appears to be on a beach. 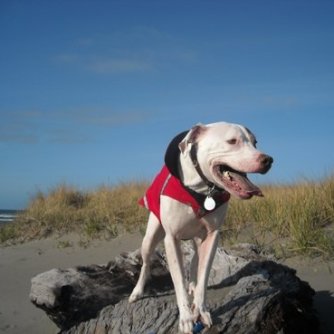 Image shows a white pit bull with a brown spot on one eye and sporting a red vest. The dog is standing on a rock on the beach.

TW: What makes Travels With Queerness a necessarily feminist project?

KS: That’s a really good question. While the travel narrative genre is slowly becoming more diverse, travelogues are still written primarily by white men. This project is an attempt to fill that gap, to explore and show our country through a different lens. It’s about intent, and it’s a feminist project because I am putting emphasis on identity–particularly my identity as a gay woman–and framing the narrative of my travels through my worldview and issues of privilege.

TW: Why should folks support your project and how can they best do that?

KS: Being out there, literally exploring spaces where we can be safe, is not going to be easy, but it’s incredibly important work. After the shooting at the Pulse Nightclub in Orlando, a lot of people are questioning the notion of the safe space, if it even exists. I don’t think it does.

I’m not scouting out safe spaces; that work has been done by a lot of organizations. What I’m doing is mapping out a vast landscape and documenting what it’s like to travel in spite of a lack of guaranteed safety.

It’s a huge undertaking, and a costly one. I’m hoping people will contribute to my Kickstarter campaign to help fund what portion of the trip I’m not able to and print and production of my book.

If you’re not able to financially support the project, please share the word with others. This is just as much a marketing campaign as a fundraiser.

Like I said, this is my contribution to an important movement. Everyone who supports Travels with Queerness in whatever way they’re able is chipping in on that contribution and making this a communal journey. And how cool is that?

Image shows a white and brown dog on the left, tongue lolling, and a smiling person with short, brown hair wearing a hoodie, sunglasses, and a seatbelt.  Text reads, “Support us on Kickstarter.”