This morning I woke up with horrible laryngitis, went to urgent care, and discovered that I’ve been fighting bronchitis for the last month. It’s ironic that during the time I’ve wanted to scream the most, I’ve been completely voiceless. All day I’ve been thinking about how to put what I want to say into words. I’ll do my best:

The last 24 hours have become a completely gut-wrenching examination of everything I’ve experienced in the punk & hardcore scene for what is now over half of my life. By now, everyone has heard the 30+ allegations against Jim Hesketh, former singer for bands like Champion and True Identity, and, like me, you’ve likely been watching that unravel all day today. You’ve seen the horrifying comments, the dismissal of the survivor(s) by people all over the internet, as well as the folks coming forward to support his victims and try to give women space to tell their stories.

I personally don’t have my own stories about Jim’s predatory nature – our bands toured together, we hung out without incident – but I have witnessed and experienced enough in the hardcore scene to know beyond a shadow of a doubt that his victims are speaking truth. And that presents a larger story which I think this conversation needs to evolve into, in time. Yes, Jim Hesketh is a problem. But Jim is not THE problem. We cannot simply denounce him and then let this conversation end.

When I started going to hardcore shows at 15 years old, I was received with mixed reactions. I was invited into the scene genuinely and whole-heartedly by some. My intentions were questioned by others – punks of all genders who doubted my sincerity, who felt threatened by new kids entering the arena.

And then there were the worst kind of dudes – the ones who were “welcoming” and excited about a new girl joining the ranks – only to try to date or sleep with me. At the time, it felt like a compliment. Being flirted with by men who were a decade older than me was flattering. I felt like I was “cool” and “accepted” when I turned 16 and a guy in his thirties started giving me sexual attention.

Young women are always taught that “girls mature faster than boys” – and older men sexualizing young girls is so normalized in mainstream culture – it didn’t strike me how bizarre it was that someone literally twice my age would want me in that way. Our mutual friends knew what was going on and nobody said or did anything. It just felt normal.

As I became more immersed in the scene and To See You Broken started touring, I began to see the rampant sexism all over the country. There were the never ending micro-aggressions (“is the band here yet?”) when we were setting our gear up on stage, constant questions like “do you write your own music?” and backhanded compliments like “you’re pretty good for a girl band!” 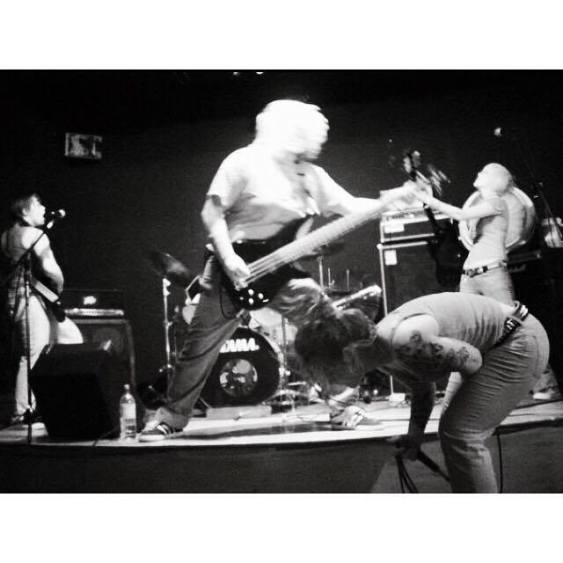 There was outward misogyny (like dudes yelling “show us your tits” when we got on stage, or the now infamous “no clit in the pit” signs at shows). There were so many sexual propositions that TSYB actually made a rule that we would NOT hook up with any men while we were on tour, for fear of inheriting a reputation for being promiscuous. Dudes were constantly badgering us for sex, and yet we were frightened that WE would be ostracized for our behavior if we ever succumb to their advances.

We wrote songs about scene sexism and rape, and the backlash was intense at times – one record review in particular stands out in my head because it compared Sara to a “bitch barking,” and I remember being ashamed for having a voice. At times it felt like everything would be easier if we would just shut up.

As I got older and began dating and having relationships with men, it took me a long time to learn how to communicate consent. Far too many partners were either ignorant about how enthusiastic / verbal consent works, or unwilling to practice it. I have dealt with a disturbing and embarrassing number of men who actively did not ask for my consent.

Men who were coercive when I was hesitant, who ridiculed me for being nervous about particular sex acts. Men who would compare me to other partners they’d had to make me feel ashamed about things I’d never done. Then, men who were disgusted with me when I admitted I HAD tried particular sex acts or slept with more people than they had. Men who said things like, “I thought you were just being coy!” when I explicitly told them “no.” Men who assaulted me while I was asleep. Men who non-consensually hit me during sex because they thought it was a turn on.

And as women, we are taught to be so self-conscious about our sexuality, we rarely speak out when these things happen. Even now, writing this, I am mortified that my family or colleagues will read it. I am still ashamed.

Recently, I’ve seen more women come forward to confront the men who have coerced, abused, and taken advantage of them. The reactions have been all over the map. I will be the first to admit that my own responses have been unfair and shitty at times. When an acquaintance first came forward about Kyle Oels years ago, I took part in a failed accountability process for him and actively tried to help him resolve his issues, despite his blatant disregard for the women involved.

When news about Andrew Arellano hit my radar, I gave him a chance to tell his story – and I was duped by his bullshit lies for months because I didn’t want to accept his victims’ experiences at face value. I have since vowed to never make that mistake again. I have realized that if we are ever going to make progress as a community, we need to tune out the manipulative rationalizations that abusers spew, and amplify the voices of their survivors. I am making a promise to myself and to my community to be better. I hope that you all will too.

With all of that said, I’d like to quickly point out the fact that I have 33 mutual friends with a rape apologist who has been accused of sexually assaulting at least two women. I have 29 mutual friends with a known abuser who has been confirmed to use sexual coercion and emotional manipulation to control his partners. I also have friends who continue to maintain their relationships with one of my ex-partners, even after hearing about his verbal abuse, control tactics, and sexual assault.

I’m honestly not trying to put these people on blast – my point is that we ALL have work to do when it comes to figuring out what we are going to accept from our friends and the people in our community. And we ALL need to figure out how to resolve these problems – preferably without the use of the cops and the courts who have failed survivors over and over again.

Women: we need your voices heard. It breaks my heart to see so many of your comments stating things like, “this is why I stopped going to shows.” While I have to respect your decision, WE NEED YOU. Don’t let these garbage humans destroy what you once loved. If you can find it in you to join this conversation, please do so. The hardcore scene needs to hear you.

Men: it’s time to sit down and listen. Women have been trying to tell you for literal decades how difficult it is for us in this subculture. So many of you constantly say things like “how come more girls don’t come to shows?” one minute, then the next minute you’re sending unsolicited dick pics to the women that do show up. Or you’re questioning the legitimacy of a new girl in the scene. Or you’re spin-kicking into an unsuspecting bystanders face with no regard for anyone’s space at a show.

(Mosh etiquette is a whole other subject that I can rant about: bands constantly tell us on to come into the pit because it’s “not just boys fun,” but what are you going to do to protect us once we’re there? I am guilty of this too, don’t get me wrong. Just two nights ago at the Angel Dust show in Portland, some shitty dude was aggressively wind-milling into folks who were clearly not enthused, crowd killing to the back of the room and making everyone uncomfortable… and even I was scared to say something to him because I didn’t know who he was, didn’t want to start a fight, and didn’t want to seem like I was overreacting to someone just trying to have fun. UGH.)

I hope my voice comes back soon because I really want to talk to you all about this. You have my word that I will do the best I can to help make things better for our community. Please don’t let Jim Hesketh’s dishonorable discharge from hardcore be the end of this conversation.

Locally in Seattle, Brian Skiffington, Sam Lee, and others are working on facilitating an open meeting to get a dialogue going. Get involved if you can. Tell your stories. Listen to one another. Maybe NWHC can be an example for the rest of the country for creating something that is truly accepting, truly radical, and truly inclusive. I’m not giving up on us yet.

Lastly, I want to acknowledge my partner, Sean, for being an amazing example of a super radical human being, a person who consistently and intentionally practices consent, and who has been listening to me rant about this nonstop and encouraging me to speak my mind. Also, to Carey, Sara, Lisa, and Katy for being in the trenches with me during the TSYB years – I learned so much from you, thank you. Let’s keep this going, please.

Remember: “Fuck you – the sexism ends here… I don’t want to keep screaming, without being heard.”

One thought on “Screaming Without Being Heard: Rape Culture in the Hardcore Music Scene”